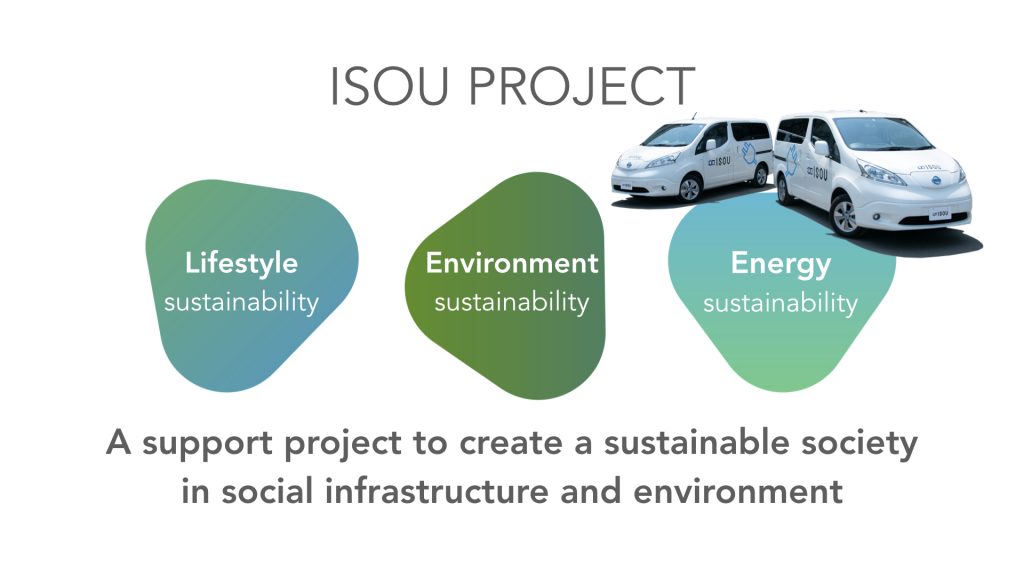 ISOU PROJECT is an electric vehicle (EV), renewable energy, and blockchain technology that addresses the challenges of a decline in transportation infrastructure due to the declining birthrate, aging and depopulation in rural areas of Japan, and a decline in the local economy due to increased energy costs. This project aims to realize a new means of transportation, regional revitalization, and an eco-friendly society by building a local currency, and next-generation transportation with an energy consumption platform. 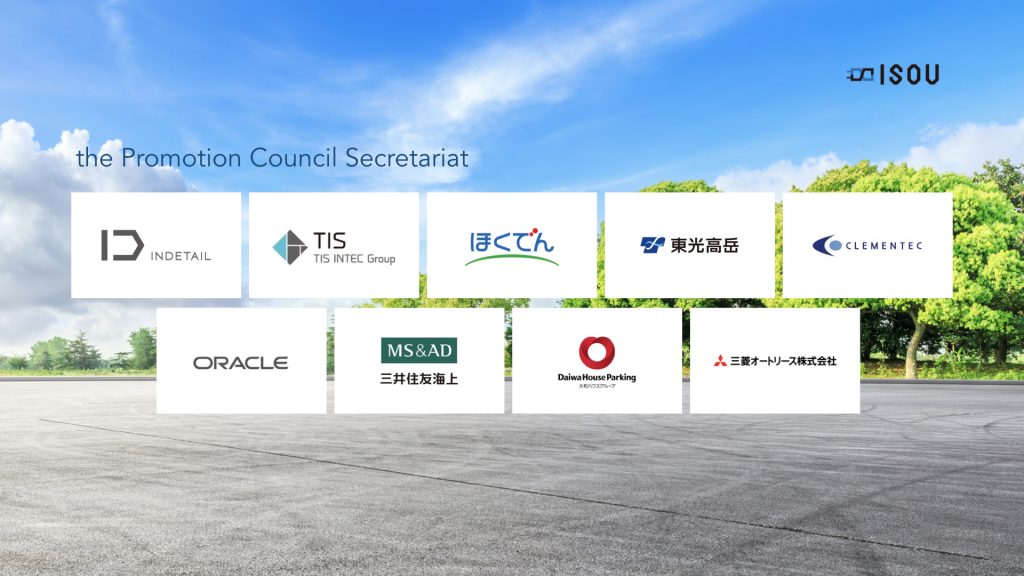 Our company (INDETAIL) and TIS, Inc. are managing companies, and in addition, the Promotion Council Secretariat is composed of nine companies, including electric power and IT, to promote business.

A small town takes a big step - a trial demonstration

In August 2019, with the full cooperation of Assabu-cho, Hokkaido, a demonstration / experiment was conducted for local residents over approximately two weeks. 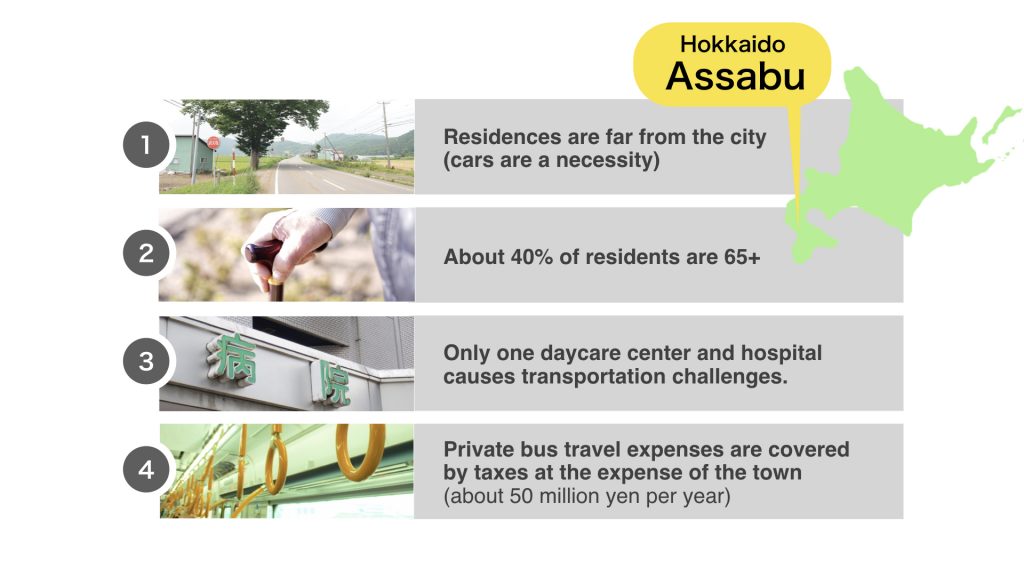 Assabu is a small town with a population of less than 4,000, but the land is vast. There is only one hospital and daycare center in the city, and some people live about 20km away from them.

On the other hand, Assabu has potential energy resources such as geothermal dams, and the mayor drew up a vision of using advanced technology and the energy of the town to help revitalize the region.

Summary of the Trial 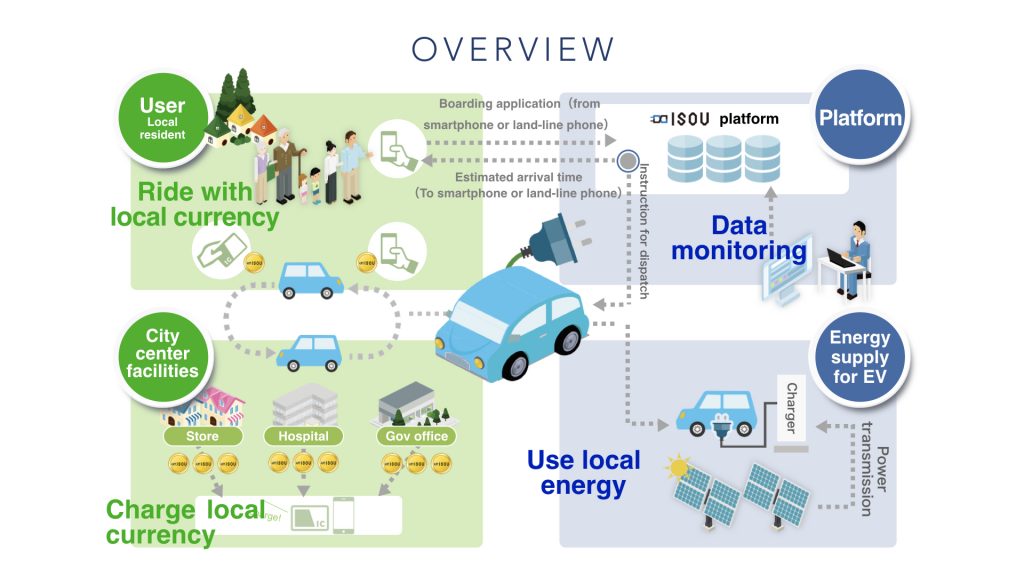 In this trial, local currency based on blockchain was issued. Residents earn local currency with a special IC card or special application when using facilities in the town such as supermarkets, government offices and post offices*. The use of this local currency is restricted to transportation services for local residents. Residents pay their local currency using an IC card or an app as the fare for boarding an EV bus.

In addition, by using the renewable energy of the town to power the EV buses, it also promotes local production and consumption of energy (this was shown during the experiment).

* Use means that there is no need to purchase products or make payments, only to visit the facilities or stores.

During the second week of the trial, we also conducted site visits for government officials, corporate managers, and various media. In spite of the tour format of 2 days and 1 night, a total of 130 people participated, and it was a great success.

Two advantages of regional currency based on Blockchain

There are two large advantages for adopting a local currency with blockchain. The first is that the town does not need any additional resources. Secondly, it is not necessary to obtain permission from the Transportation Bureau. In Japan, in order to carry out business using a car, it is necessary to apply to the Transportation Bureau and be examined for certain conditions. However, the EV bus ride fee for the ISOU PROJECT does not fall under this law because it is a local currency acquired through the use of the facilities in the town and is virtually free.

These two merits lower the hurdle when each local government decides to introduce this measure.

Shared on many media outlets, broadcasted on TV news

In addition, the demonstration conducted in August was widely reported in newspapers and the web, and we were able to increase attention towards the effort to revitalize depopulated areas.

Plans for the Future 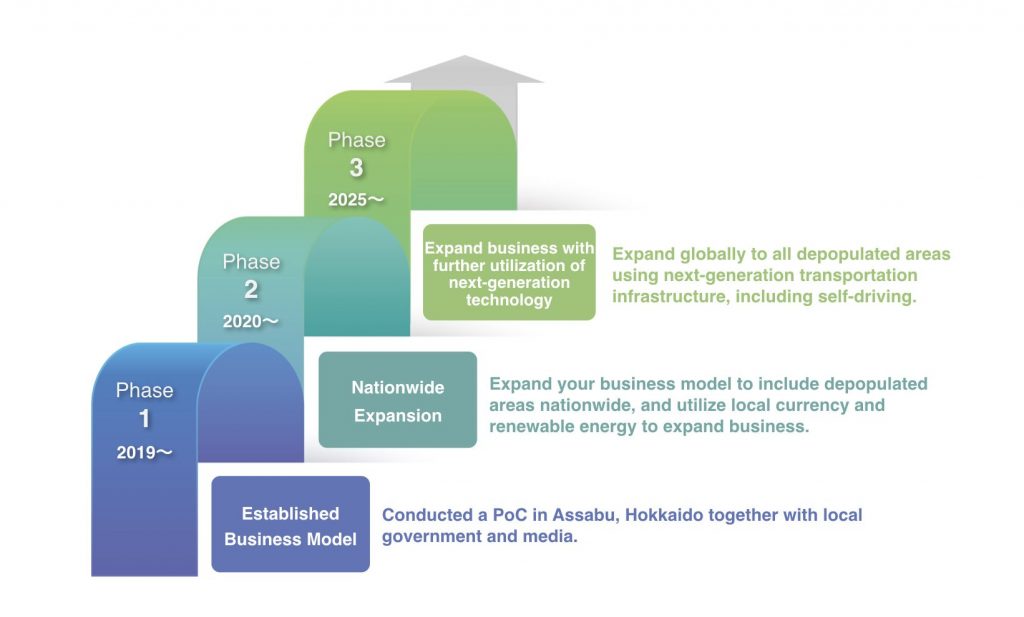 Phase 1 started in this summer's demonstration in Assabu-cho, and future developments will be aimed at nationwide deployment in Japan beginning in 2020, and global deployment including automatic operation starting in 2025.